If you're making one of the biggest hurdles....getting to the start line, here is some information that you'd probably like to know/be reminded of.

Check in. I will be there early with a roster. Check in with me. I want to make sure there is a list of people so that I can get this site updated with proper info.

Weather - According to NOAA, we're in for a pretty good day.
Course - Go here for all the course info.

Results - The end of the race will be at the Greenland Open Space sign. It will not be like last year. You will now get the downhill feeling of rolling all the way back to the open space. Yeah, it pushes it to a few miles over 150 miles, but you can always quit. When you get there, you will need to sign your name and time on a sheet. My wife will be there in a white mini van for those that roll in before me. I will be hanging around for a while after I'm done, so just look for me.
***If you don't check in and sign the sheet, you won't be listed in the results***

Awards - I have made up trophies for the Top 3 men and Top 3 women (if 3 don't show up, I'll just hold on to them). I also made a trophy for the last place person.
Here's what they look like: 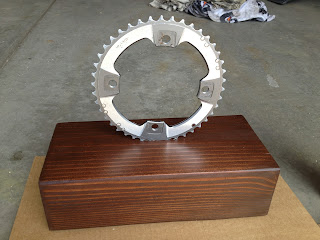 Pictures - Check Race Vista for all the pictures.

I'm going offline at 5 today and will no longer be responding to anything. I have a show to cohost at 6:30pm. Drew is leading a special episode of "The Dirt" discussing today's UCI/USAC clarification.
You should listen to the LIVE SHOW.